Few snapshots compare to the mixture of delight, surprise and joy when a child unwraps his particular version of the Red Ryder BB gun. Such a moment occurred two days ago when our son Carter tore off the wrapping paper to reveal what he most wanted for Christmas: a new football complete with a kicking tee. Shortly thereafter the family present festivities, we laced up our sneakers and tossed the pigskin in the front yard. He practiced backing up, place kicker style, and booted the ball as far as he could. Day 1 of the football/tee era ended well.

Day 2 found Carter and I again in the front yard, tossing and kicking. While the front yard is spacious, it can’t quite contain my foot. Thus, when I wanted to take the ball and tee out for a test flight and see what they could really do, I found myself on the asphalt down the street a ways, priming to kick to a receiving Carter towards the end of our front yard. Wanting to boost confidence and get him to be aggressive, I yelled (I was a ways down the road), “If you can catch my kickoff, you get a snoopy (a candy).” The C-Dawg will willingly abandon his family, his sense of personal hygiene and perhaps his morals for a piece of sugary delight. Thus, motivation soared.

I raised my hand and made like Al Del Greco. I booted a beautiful, soaring kickoff that streaked across the darkening twilight. It sparkled and twirled in the glowing Christmas lights. And it came down like a bomb towards the awaiting C-Dawg. With fire in his eyes, he moved under the pigskin and reached to grab the ball. To say that the ball grabbed him might be a bit more accurate. He used three body parts to secure the ball: his right hand, his left hand . . . and his nose. But he caught the ball. I jumped with joy. “Nice job, C-Dawg. That was the greatest catch ever.” Truly it was. It made Dwight Clark’s end zone grab seem ordinary by comparison. I ran towards him with a smile on my face to discover not a beaming little Lynn Swan, but a budding Sylvester Stallone, doing his best Rocky Balboa vs. Apollo Creed imitation. Blood streamed down his face, drowning his upper lip and chin in a sea of crimson.

My beloved wife, witnessing the scene through the living room window and hearing her son’s screams of terror, flew out the front door to comfort her son and noticed the beaming smile on my face. Her expression said, “How, in the midst of such agony, could you have such joy?” The answer, of course, is the meaning of Christmas.

To celebrate Christmas in this world is essentially to celebrate a glorious catch, even in the middle of utter agony and pain. The Nativity is essentially joy being born in the center of strife. Christ came into this world- a universe rife with toil and misery- and announced hope to a hopeless world.

Thus, to celebrate my son’s glorious reception, though pain-producing for him, is essentially to celebrate Christmas.

Yes, he recovered and enjoyed his snoopy.

And yes, I vow to celebrate Christmas in less painful ways next December.

Merry Christmas from The Write Project.

power of writing, story of Christmas, why write, writing, Zechariah

Tucked towards the end of Luke 1, as part of the pre-show entertainment, so to speak, is a single phrase that could be the line that launches a thousand ships, or at least a nice compositional armada. It’s so great that I’m surprised that the new translation of the NIV doesn’t have it in bold. It’s the story of how John the Baptist got named. 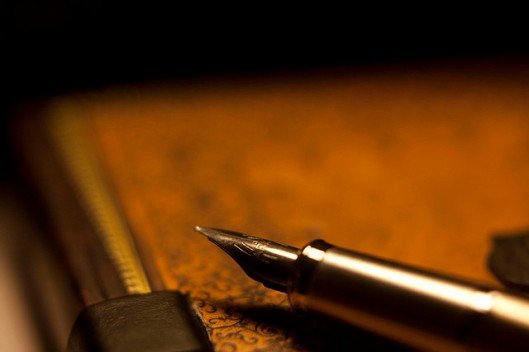 After getting the visit from the angel announcing his impending fatherhood, Zechariah is as silent as an assassin, unable to speak, unable to share his joy. Just think. The whole time Elizabeth is pregnant, Zechariah can’t joke with the guys at the synagogue about how his son is going to be the next Nobel scholar or find a cure for leprosy. He can’t even converse with his own wife about the realization of a life-long dream. All they can do is look into each other’s eyes. Well, and Zechariah can cash his wife’s 50,000 words per day without giving any change in return.

And then the baby comes.

In the aftermath of the birth of joy, the likely question comes up: what should the boy’s name be? The assembled mass of friends and family are not shy about giving their opinions. (Funny how two thousand years changes little in the general opinion-giving department.) “Zechariah,” says one well-meaning uncle. “It’s got to be ‘Zechariah.’ He has to be named after Dad. He’s the first-born, after all.” At this point Zechariah starts gesticulating and shaking his head. He grabs for a tablet and this is when another Christmas miracle occurs.

Let me pause and say that the hermeneutics in this post are suspect, untrained and possibly erroneous. But, in my defense, I don’t quite care enough to let sleep elude me. I just think it’s so, so cool what happens next.

“He asked for a writing tablet, and to everyone’s astonishment, he wrote ‘His name is John.’ Immediately his mouth was opened and his tongue set free, and he began to speak, praising God.”

Sure, a more proper exegesis might reveal that he’s simply being faithful to the word the angel brought, but I’d like to think that the act of writing is the vehicle that drove him there. I’d like to think that the craft of writing has some kind of magical, life-bringing power to unshackle folks from the burdens that constrain. That writing liberates the writer from the web of conflicting thoughts that criss-cross his brain. That writing sets you free from the tyranny of the mundane and uninspired life. That the simple act of pairing a few words on the page like they’re meant to be wed is an exercise in deliverance. That writing is so much more than the drudgery so many unenlightened folks make it out to be.

Maybe writing really does bring freedom. It sure did for Zechariah. Maybe it will for you as well. I know that I sure feel a greater sense of bliss having brought this post to life.

Well, what are you waiting for? Get to writing already. Pen something masterful and witty. Surprise your spouse with a well-crafted letter. Favor your students with a sonnet in their honor. Fashion a delightful, creative tale about teamwork to share with your colleagues. It will probably make their Christmas. Go ahead. Get to writing.

Three of my beloved children had saved up the requisite $25.00 to open a savings account so I acquiesced to their requests and called the bank.

“How busy are you right now?” I asked the lady on the other end of the line.

“Not busy at all.  I can put your name down right now.”

We walked into the bank with the kids clutching their cash, including a few quarters to get to the magic $25 level.  The receptionist said, “You must be Blake.” I nodded. “Go ahead and have a seat, and we’ll be with you shortly.”

Thirty minutes later I began to fidget. The minutes crawled by.  I began to silently curse all things bank-related. I contemplated masochistically all the places I’d rather be. Suddenly the dentist’s chair seemed inviting.  “A nice root canal would be lovely or maybe a refreshing tooth extraction,” I thought. Perhaps a delightful police interrogation.  Maybe even some cozy medieval torture.

Finally the personal banker’s sloth-like hands stopped hesitantly teasing the keyboard like it was on fire, and he said, “Okay, I’m done . . . with Jacie.”

That was it?  Done with only one child? Pardon me?  The DMV seemed like a well-oiled machine by comparison.  I stared with a sense of disbelief. My eyes widened. My spirit sank. Though I had nothing on my agenda that afternoon, the agony of continued waiting seemed more than I could handle.

And then I looked at my kids. Though they didn’t make a picture that’d threaten Norman Rockwell, they were relatively content. I expected, and perhaps wanted, them to be my comrades, ready to pick up the arms and overthrow the Bolsheviks.  I half wanted them to mirror my inner rage, to put the stranglehold on Righteous Indignation like I was. But they didn’t. They rather just sat there, eager to have their own bank accounts.

The waiting didn’t bother them because they were focused on what was to come.

Finally, two hours after we’d entered the bank, we excited with three new bank customers, each clutching their own bank books and dreaming of growing savings accounts. They wondered a tad why I kissed the parking lot outside the bank and mentioned Martin Luther King, Jr., but other than that, they were quite ecstatic. The waiting was worth it. The pay-off was enough.

And, of course, as I sit here this dawn contemplating the family Christmas tree in front of me, I can’t help but marvel at the way God uses children to teach me lessons time and time again.  How he humbles me and crystallizes my perspective, especially in the weeks leading up to Christmas.

“These present sufferings are not worth comparing with the glory that will be revealed in us.”  Sometimes the waiting in this fallen, miserable world is interminable. Sometimes the “Come quickly” cries of desperation leave our lungs too often. Sometimes the muck too forcefully keeps us stuck.

But sometimes the eternity of waiting is a simple reminder that the glory to come is more than worth it.  That the tunnel is not never-ending. And that the brilliant light at its end is one that only a Son could produce.